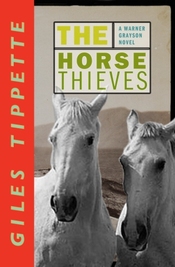 A gang of Mexican bandits had robbed Warner Grayson and left him to die. In the vast, waterless alkali flat, Warner spied his salvation: a proud, beautifully lined horse of a breed he'd never seen before, as lost and desperate as he was himself. Only a consummate horseman could save the horse's life and his own in the bargain. If he survived, he swore he'd hunt down each of the six bandits who had wanted him dead.

Warner needed water. And then he needed help from his old friend Wilson Young, the former outlaw turned respectable casino owner. But with his quest for vengeance came Laura Pico, the fiery, beautiful rancher made a widow by the selfsame bandits, with her own bloody score to settle...
About the Author

Former rodeo cowboy, gold mine owner, mercenary pilot and forever a man of Texas, Giles Tippette was one of the West's most beloved storytellers.  He passed away in October 1999.