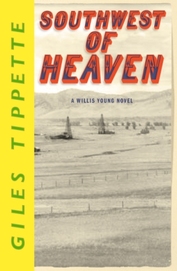 In 1924, Willis Young, a disenchanted 27-year-old ex-WWI flying ace turned unemployed wanderer, is at odds with his father, the legendary pardoned gunslinger Wilson Young.  By chance, Willis is reunited with his former wartime airplane mechanic, Dennis Frank, whom he hasn't seen since the Armistice. A decade Willis's senior, Dennis is a wildcat oil prospector arriving in Galveston to get Teddy Atlas, a high-rolling gambler, to finance his next venture. Dennis soon finds out that Willis owns a vast but worthless piece of land west of Pecos, and bamboozles the deep-pocketed Atlas into bankrolling an elaborate oil-drilling project there. Meanwhile, Willis is hopelessly enamored of wealthy Houston divorcee Genevieve Maxwell, who is far too savvy to go chasing after oil in west Texas. Using an airplane to prospect in the badlands, Willis runs afoul of a crooked judge, a kindly sheriff and a beautiful blonde apparition whom he is convinced is an angel (she miraculously supplies eight exotic Swiss banded oxen of mythic prowess). Dennis finds no oil, but when he strikes pure artesian water instead to the delight of everyone in Pecos County, Atlas shows up for a shakedown until generous Genevieve steps in to lend a hand.  In the course of all the drilling and conniving, Willis eventually comes to terms with his father, and even winds up with a little black gold of his own.
About the Author

Former rodeo cowboy, gold mine owner, mercenary pilot and forever a man of Texas, Giles Tippette was one of the West's most beloved storytellers.  He passed away in October 1999.