Sports
Wild, High and Tight: The Life and Death of Billy Martin by Peter Golenbock 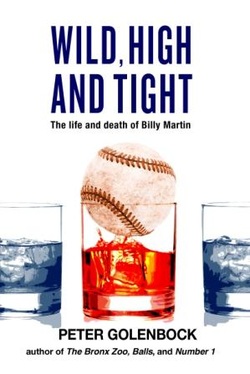 On the field, he played and managed with an aggressive intensity that sometimes spilled over into fury.
Off the field, he cruised around in a chauffer-driven gold stretch limo, stocked with a full bar, video, and phones, sporting a custom license plate: YANKEE 1.
To many people, he was a hero.  To others, he was a disgrace.  Labels are easy to apply, but no single word can sum up the complex and tormented life of Billy Martin.
Billy was one of the great managers of baseball's modern era, perhaps the greatest.  In every new job, he built losing teams into immediate winners: the Minnesota Twins, Detroit Tigers, Texas Rangers, Oakland Athletics, and the New York Yankees all triumphed with his exciting "Billyball" style of play.  And all fired him, for his off-field escapades inevitably eclipsed his baseball achievements.
He was possessive, jealous, a brawling bully who was also a victim of smarter, subtler, more powerful bullies; wildly adulterous as a married man; a public figure who was privately, desperately lonely; a street kid who coveted the rich and famous; an alcoholic who maintained total control on the field, but sought the anonymous camaraderie of bars where he could drink to ease his insecurities.  His death in a car wreck on Christmas Day 1989 symbolized a life of contradictions gone violently out of control.
Wild, High, and Tight  is unlike any sports biography.  Much more than a recitation of wins and losses, it is a rich, engrossing, intimate portrait of a little guy, an American everyman who found fame, fortune, all the booze and women he wanted--but was undone by the very fantasy he chased.

From Publishers Weekly
Martin (1928-1989) grew up poor in Berkeley, Calif. A high school drop-out, he tried out for the Oakland baseball team of the Pacific Coast League; the manager was Casey Stengel, who took Martin to New York when he became manager of the Yankees. There Martin played a key role on several championship teams. But a drunken fistfight—which seems to be Martin’s favorite recreation—at a nightclub ended his Yankee career. The other central figure in this book is Yankee owner George Steinbrenner. In alternating chapters Golenbock shows how the lives of Martin and Steinbrenner paralleled each other, which, ironically, highlights Martin’s achievements and magnifies Steinbrenner’s ineptitude. Golenbock (The Bronx Zoo) looks into Martin’s womanizing, his prodigious drinking and his death in a car accident. Although his friend, Bill Reedy, was charged with driving while impaired, Golenbock maintains that Martin was the drunk driver. This is an extremely thorough and comprehensive biography of one of baseball’s most controversial figures.

From Library Journal
As portrayed by the author, former baseball player/manager Martin’s life was a triangle of baseball, alcohol, and sex, each of which he embraced with a fervor and all of which ultimately consumed him. Symptomatic of Martin’s psyche were his many feuds with managers, players, wives, girlfriends, and owners, including his celebrated tiffs with George Steinbrenner, whom the author considers Martin’s equal as a manipulator. Considerable attention is given to the manner of Martin’s death in a car wreck. Golenbock argues that, contrary to official findings, it was Martin and not a companion who was driving at the time of the accident. As in his controversial work on college basketball, Personal Fouls (LJ 8/ 89), the author does not always cite specific sources. Nonetheless, this raw treatment of a most controversial character is sure to generate heavy demand.

From Booklist
The late Billy Martin was one of the most controversial figures in modern baseball history and one of the most mercurial. Golenbock, the best-selling author or coauthor of numerous, high-profile sports bios, coauthored Martin’s autobiography, Number 1, in 1980 and believes this volume to be a kind of sequel to that earlier effort. Though Golenbock acknowledges early and often that most of Martin’s problems stemmed from his ever-escalating alcoholism, the beleaguered manager is portrayed as the victim of egocentric players, owners, and wives. The vast majority of the book focuses on Martin’s hate-hate relationship with New York Yankee owner George Steinbrenner, who hired and fired Martin five times. Steinbrenner will not be inviting Golenbock to any cocktail parties. The Yankee owner emerges here as an insecure egomaniac born with a silver spoon in his mouth. Steinbrenner, according to Golenbock, wanted to take credit for Martin’s success and sought to humiliate his manager by planting “informed source” pieces in New York papers. Martin’s temper—fueled by booze—would then erupt, and the battle would be on. Though Golenbock is obviously sympathetic to Martin, the overall impression here is of a life badly out of control. Provocative reading for Yankee fans.

From Kirkus Reviews
Golenbock barely stays within the foul lines in this Baseball Babylon catalogue of the late Yankees manager’s career, his celebrated fistfights, hangovers, trysts with underage women, and battles with owners, players, and the press. In an overlong effort, Golenbock (Fenway: An Unexpurgated History of the Boston Red Sox, 1992, etc.) competently reviews Martin’s playing days in the 1950s and his drunken carousings with Mickey Mantle and Whitey Ford. He brings insight into the father-son relationship he had with Casey Stengel and their eventual falling-out. And Golenbock does a good job of retracing Martin’s managerial odyssey: AAA Denver in 1968; winning the division with the Minnesota Twins in 1969 and being fired after the playoffs; his turnaround of the Detroit Tigers in 1971, capped by taking the division the following season, and then dismissal after a tumultuous 1973; being named Manager of the Year in 1974 for resurrecting the hapless Texas Rangers only to be fired in July 1975; then, his achievement of a lifelong dream in being named to manage the New York Yankees. All the well-publicized hirings and firings (five times by the Yankees), the womanizing and bar brawls, and the ugly fights with George Steinbrenner, Reggie Jackson, Jim Brewer, and others are here. While any biography of Martin would have to include Steinbrenner, Golenbock uses an inordinate amount of space to go after the domineering, controversial Yankees owner (a “weak, self-centered tyrant” and “a real jock sniffer”). Steinbrenner’s youth and teen years at Culver Military Academy, etc., receive lengthier, more detailed attention than Martin’s background and childhood. And in asides to his recounting of the messy details of the 1989 auto accident that killed Martin, Golenbock takes his widow, Jill--and Steinbrenner--to task for having “killed his spirit” and “ruined his life.” Much of this is a rehashing of the author’s earlier books on the Yankees, but it will, nonetheless, stir up controversy by reopening old wounds.

About the Author
Peter Golenbock is the author of more than a dozen books, including the national best-sellers Dynasty, The Bronx Zoo (with Sparky Lyle), Number 1 (with Billy Martin), Balls (with Graig Nettles), and Personal Fouls, an investigation of Jim Valvano and the North Carolina State University basketball program.  He lives in St. Petersburg, Florida.