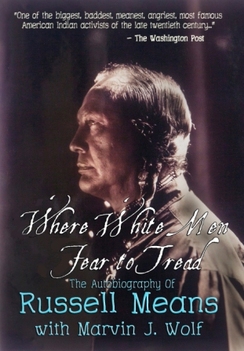 An autobiography of epic scope--the riveting, controversial story of Russell Means, the most revolutionary Indian leader of the Twentieth Century.

Where White Men Fear to Tread tells the absorbing story of the accountant-turned-Indian activist who burst onto the national scene when he led a seventy-one-day armed takeover of Wounded Knee, South Dakota in 1973.
Ever since, Means has done everything possible to dramatize the Indian wish for self-determination, from storming Mount Rushmore, to seizing Plymouth Rock, to fighting for the rights of indigenous Indian tribes in Central America, to running for President on the Libertarian ticket in 1988. The autobiography recounts Means's remarkable story--his incarcerations in prison, the thirteen assassination attempts on his life, his intellectual transformation to an outlaw personality, his spiritual awakening, and his most recent reincarnation as a Hollywood movie star in The Last of the Mohicans and Pocahontas.
Told against a larger historical background, Means's book retells the tragic quest of Indians to maintain their cultural identity in the face of unremitting white assimilation. We come away from Where White Men Fear to Tread knowing that Means is one of the bravest patriots in American history--a man in the tradition of Patrick Henry, Nat Turner, John Brown, Sitting Bull, and Abraham Lincoln, for these men are Means's true historical ancestors. Long awaited, this autobiography takes its place among the enduring works of America's greatest political and social leaders. In the tradition of The Autobiography of Malcolm X, Where White Men Fear to Tread is one of the most socially illuminating and provocative works to come along in many years. 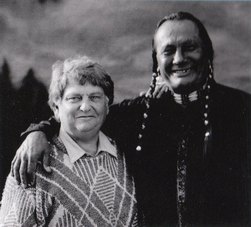 About the Authors
Russell Means, born an Oglala/Lakota in 1939, was raised on the Pine Ridge Indian Reservation near the Black Hills, South Dakota and then in Vallejo, California. Means divided his time between Chinle, Navajo Nation, Arizona, and Porcupine, South Dakota. He was married five times, and was the father of seven children and three adopted children. An activist, actor, writer, painter, and singer, Means passed away in 2012 at the age of 72. His ashes were scattered in his beloved Black Hills.

Marvin J. Wolf is an award-winning writer of over a dozen nonfiction and fiction books and is a member of the American Society of Journalists and Authors. He lives in Los Angeles.

Reviews
“His unwieldy yet absorbing epic conveys his furious, resourceful activism, intertwined with (and sometimes overshadowed by) his own dramatic, messy life including heavy drinking, attempts on his life, a stint in prison and several rocky marriages.”
—Publishers Weekly

“This extremely readable and chatty autobiography gives an insider’s eyewitness account of the events of Means’s life, allowing non-Native readers some insight into the world of contemporary Native America with all of its strengths and weaknesses. …Highly recommended.”
—Library Journal

“…riveting account of the life of perhaps the most compelling American Indian of this century. Means has never been far from controversy, and in this autobiography, written with Marvin J. Wolf…Means recounts his nearly always interesting and complicated life. His memoir is action-packed, offering insider accounts of events like AIM's 71-day takeover of Wounded Knee in 1973, Means's near-constant barroom brawling, and his frequent brushes with death. …All in all, Means comes across as honest…. If nothing else, being able to get inside his head and understand his rationale for certain choices…is worth the price of the book. …Means manages to sustain interest and energy throughout.”
—Kirkus Reviews

“American Indian activist Means tells his life story with all the clash and fire of thunder and lightning. …His autobiography, a tale spiked with an uncompromising attitude, frank regret, warranted pride, ringing political truths, and spiritual revelation, combines one man’s personal quest with an insider’s view of a crucial social movement. Means provides powerful testimony to the devastating consequences of the federal government’s attempted cultural annihilation of American Indians in this century as well as the last as he recounts his difficult childhood, his self-destructive years as a bar brawler and drug dealer, and, finally, his transformation from a “part-time” to “full-time” Indian with a deep commitment to militant activism. Means is no saint, but even if some of his opinions and actions are drastic, his intentions are honorable, and his story should be heard.”
—Booklist

“Mean’s tale gives one a visceral understanding of today’s Indians, their ancestors, and the many betrayals they have suffered.”
--Chicago Tribune

“Not since war chiefs such as Geronimo or Crazy Horse has an Indian leader so polarized the American public as Russell Means.”
--Dallas Morning News

“One of the biggest, baddest, meanest, angriest, most famous American Indian activists of the late twentieth century.”
--The Washington Post

“A reading of Means’s story is essential for any clear understanding of American Indians during the last half of the twentieth century.”
—Dee Brown, author of Bury My Heart at Wounded Knee

“Russell Means awakens the spirit of Sitting Bull and Crazy Horse in Where White Men Fear to Tread.”
—Oliver Stone

“Means’s voice resonates with a conviction that demands respect. He is a reincarnation of the warrior and the seeker of visions.”
—N. Scott Momaday, Pulitzer Prize-winning author of House Made of Dawn

“Russell Means is the brave voice of a revolutionary out of the great wilderness, a man who must be heard by every caring citizen of the land. Where White Men Fear to Tread reveals the true American warrior.”
—Gerry Spence, author of From Freedom to Slavery

“Anyone who wants to understand the bitter anger of the American Indian Movement can find the answers in Russell Means’s autobiography. It’s a powerful indictment of racism.”
—Tony Hillerman

“Where White Men Fear to Tread demonstrates Means’s significant role in the restoration of his people’s self-esteem, from the early days of the American Indian Movement until the present.”
—Peter Matthiessen, author of In the Spirit of Crazy Horse

“I find myself moved by the sheer strength and searing emotional power of Where White Men Fear to Tread. Women, indeed everyone, cannot help but become totally absorbed by this extraordinary story.”
—Dr. Annette Jaimes, leading American Indian scholar

“Russell Means has written a moving, entertaining, and ultimately inspiring book that shows why and how he became the symbol of his people’s aspirations.”
—Senator James Abourezk (R) South Dakota