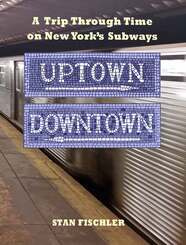 ​Originally published in 1976, UPTOWN, DOWNTOWN now makes its first appearance as an ebook!

The New York City subway system in a technological marvel, with a total of 710 track miles burrowing 180 below street level at some points and climbing 88 feet into the air at others. Stan Fischler, a longtime train buff, tells the fascinating story of how this system came to be, from its aboveground origins in the nineteenth century to its subterranean present, and speculates on what the future holds. It is a story that involves engineering and adventure, politics and personalities.

All the ups and downs of designing, building, and running a very special railroad are told in vivid anecdotal detail, including…
•Early horsecar transit
•Rube Goldberglike experimental lines
•The subway station with a grand piano, fountain, and frescoes
•The politics of public transportation
•History-making disasters
•Curious rolling stock
•Subway art
•Movie-making on the line
•And much more, including Fishcler’s guide to the best rides in town.

Pen-and-ink drawings evoke the flavor of earlier times.
ABOUT THE AUTHOR
Stan Fischler, a New Yorker who has explored every mile of the city's subways, is the author of more than 40 books. He wrote a column for the Toronto Daily Star syndicate and was the color commentator for the New York Islanders telecasts. His articles have appeared in The New York Times, Weekend magazine, Sports Illustrated, and other national publications.