Memoir/Military--WWII
Tumult in the Clouds by James Goodson 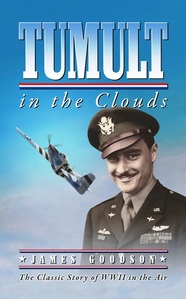 “An utterly compelling and intensely personal account of war in all of its horror and excitement—a thrilling adventure story and an enthralling, compassionate witness to incredible heroism. I was gripped from the first page to the last.”
—John Nichol, coauthor of Tornado Down

“A classic…Tumult in the Clouds will continue to be read for many years to come. It is an inspiring book.”
—Len Deighton

“The air war was for him, with all its horror, the best of times. Forceful, romantic, comradely: an authentic reflection (if not the whole) of the way it was.”
--Kirkus Reviews

When the SS Athenia was torpedoed and sunk during the first hours of World War II, passenger James Goodson survived—and vowed to become an RAF pilot even though he was an American. This is his story, from the first day of the war to the last, of how he became one of history’s leading fighter aces.
Starting out flying Spitfires for 416 (Canadian) Squadron and then for an RAF Eagle Squadron, Goodson transferred over to the Thunderbolts and Mustangs of the Fourth Fighter Group when the U.S. joined the war. Mixing it up with the Luftwaffe’s very best pilots accompanying bombing runs into the heart of Germany, Goodson scored thirty kills. But the “King of the Strafers” finally got shot down trying to attack a Me 163 rocket plane. Captured by the Gestapo and only hours away from execution, he managed to buy himself more time by showing the commandant how to blow smoke rings!—and was moved to Berlin, just as Allied bombers besieged the city…
With breathtaking descriptions of aerial dogfights and vivid portraits of the men who fought, Tumult in the Clouds is a dramatic, gripping story of courage and sacrifice—and a stunningly personal account of war. 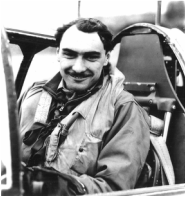 About the Author
James Alexander Goodson, known as “Goody,” was born March 21, 1921, in New York City to British parents and was raised in Toronto. He was studying languages when he set out for Europe in the summer of 1939. He survived the sinking of the ocean liner Athenia on September 3, 1939 by a German U-Boat. It was then that he decided to do his part to help rid the world of Nazism. He was one of the first Americans to enlist in the Royal Canadian Air Force and flew in one of three Eagle Squadrons made up of Americans. The Eagle Squadrons became part of the 4th Fighter Group of the U.S. Army Air Forces in 1942. Goodson was one of the leading Army aces of the war with 15 air kills and 15 ground kills from strafing runs, giving him the nickname “King of the Strafers.” Was shot down over Germany in June 1944 and captured, held at POW camps in Poland and in Germany. Among his awards were the Silver Star, nine Distinguished Flying Crosses, the Purple Heart and the Air Medal (twenty-one times). He later served in the Air Force Reserve and retired with the rank of lieutenant colonel. After the war, Goodson became an executive with Goodyear, Hoover and the ITT. His memoir, Tumult in the Clouds, was first published in 1983. Goodson’s wife of sixty-two years, the former Gwendolyn Rice, died in April 2014. Goodson passed away in Plymouth, Massachusetts at the age of ninety-three on May 1, 2014.