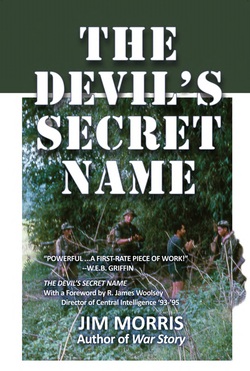 Soldier of Fortune, Witness of Fate:

A highly decorated Green Beret commander and acclaimed military writer, Jim Morris spent his post-Vietnam years as a journalist on assignment in the world's most dangerous battle zones.  Armed only with a reporter's eye and a soldier's heart, he cover the Third World conflicts that served to forge a post-Cold War world, shaping lasting peace and sowing the seeds of global terrorism.  An embedded journalist, years before the term was coined, he bore witness to the fierce realities and uncertain outcomes of guerrilla warfare.

From the jungles of Southeast Asia to the shattered peace of the Middle East and the violent twilight world of El Salvador, here are the frontline dispatches of a veteran reporter and seasoned solider.  Inevitably the only reporter on the scene, Morris chronicles more than combat shrouded in the fog of war.  Living among the soldiers, his remarkable battlefield reports capture the extraordinary courage, unwavering faith, and the dark humor common to all combat troops.
About the Author

Jim Morris served three tours with Special Forces (The Green Berets) in Vietnam. The second and third were cut short by serious wounds. He retired of wounds as a major. He has maintained his interest in the mountain peoples of Vietnam with whom he fought, and has been, for many years, a refugee and civil rights activist on their behalf.

His Vietnam memoir War Story won the first Bernal Diaz Award for military non-fiction. Morris is author of the story from which the film Operation Dumbo Drop was made, and has produced numerous documentary television episodes about the Vietnam War. He is author of three books of non-fiction and four novels. He has appeared on MSNBC as a commentator on Special Operations.