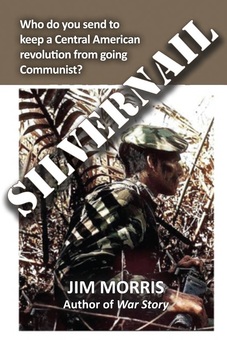 The Green Berets' deadliest asset, he was chosen to do their most dangerous job...

The Green Berets sent Captain John Silvernail to San Sebastian to change the tide of history. His mission: to hook up with the rebel army that was whipping the pants off the U.S. backed dictator. His goal: to win its leader's confidence before Castro did.

But to get on Comachos's good side, Silvernail had to fight for him. And once the fighting had started, there was no telling where it would lead or when it would stop.
About the Author

Jim Morris served three tours with Special Forces (The Green Berets) in Vietnam. The second and third were cut short by serious wounds. He retired of wounds as a major. He has maintained his interest in the mountain peoples of Vietnam with whom he fought, and has been, for many years, a refugee and civil rights activist on their behalf.

His Vietnam memoir War Story won the first Bernal Diaz Award for military non-fiction. Morris is author of the story from which the film Operation Dumbo Drop was made, and has produced numerous documentary television episodes about the Vietnam War. He is author of three books of non-fiction and four novels. He has appeared on MSNBC as a commentator on Special Operations.