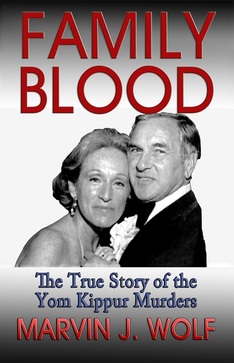 Family Blood takes us through the morass of one clan's greed, jealousies, manipulations, and tantrums. Long before murder raised its bloody head, tax evasion, theft, insurance fraud, embezzlement  extortion, and racketeering were merely specials on the family crime du jour menu. Dapper, dishonest granddaddy perfected a scheme to fool auditors. His son-in-law, Gerald Woodman, is a scam artist. Gerald's two sons, Neil and Stewart, gamble in Vegas and rub elbows with the mob. If you need the insurance money, is whacking Mom and Dad such a stretch? Does a book about despicable people make good reading? It does, as attested by dozens of five-star reader reviews.  The author presents motivation, character and psychology in equally compelling measures. Good detective work wins out as police peel away onion layers of dis-information to expose sordid facts. The title refers to the occasion chosen for the violent end to Gerald and Vera Woodman's lives.

Gerald Woodman, an Englishman and an Orthodox Jew, came to American penniless and hungry for the good life. By 1980 he had gained and lost two fortunes, had built his plastics company into a cash cow that supported his large extended family in great luxury. Killed in 1985 along with his wife Vera, the police asked Vera's sister if the Woodmans had any enemies, she replied , 'Yes, their sons.' Family Blood follows the investigation of these murders and reveals a story of the American Dream gone wrong. Gerald, behind his facade of charm, piety and filial warmth, was a ruthless, amoral businessman, a philandering husband, a ferociously abusive father, and a compulsive gambler. His sons, Neil and Stewart, inherited his charm and business principles. This is the story of the hidden dynamics of an outwardly successful American family that came to a shocking and violent end. It is also the story of a clan of whose menfolk guarded a dark secret from their wives - and everyone else - for three generations. Further it is the chronicle of two dogged police detectives who exposed the Woodman's sordid secrets to the light of justice.

"Colorful and compelling, a true-crime whodunit that also amounts to a portrait of a tragically dysfunctional family, a primer in how to run a crooked business, and a kind of cracked version of the Horatio Alger story."
--Los Angeles Times

Over a career spanning forty years, Marvin J. Wolf has written for television and authored many nonfiction works, including bestsellers Family Blood: The True Story of the Yom Kippur Murders,  Fallen Angels and Where White Men Fear To Tread.