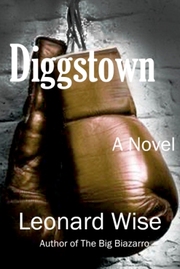 When Paul Augustus Caine is released from prison in Winfield, Georgia, he immediately gets to work on his next scam. Caine and his partner, Charles "Fit" McCoy, travel to a small town not far from the prison: Diggstown, a place obsessed with boxing.
Mean-spirited Boss James Gillon owns almost all of Diggstown. He is feared by many but also respected because he was the former manager of Diggstown’s pride and joy, the once-famous boxer Charles Macum Diggs, the man for whom the town is named.
Caine manipulates Gillon into making a bet by talking trash about Diggs, saying that a fighter named Honey Roy Palmer can knock out any ten Diggstown men in two days. The bet is $10,000…and the con is on--the city slickers against the redneck hicks. Now all Caine has to do is convince Palmer to come out of retirement and risk his life for one last big score.
The hooks, jabs, crosses and double crosses fly fast and furious as bookies circle the fight and the side bets grow to outrageous amounts. Caine expects to walk out of Diggstown with a cool half a million, while Gillon expects to win it all.  While Caine and Gillon angle for an advantage, all Honey Roy Palmer has to do is achieve the impossible…
Made into a feature film starring James Woods, Lou Gossett Jr., Bruce Dern, Heather Graham and Oliver Platt, Diggstown was originally published by Doubleday as The Diggstown Ringers.

Here's what the critics have to say:
“Wise serves up a rollicking knockout blow about a big boxing hustle.  …Fast-paced, high-powered entertainment.”
—Publishers Weekly

“But for the shortage of space, I would be quoting entire chapters from Leonard Wise’s second novel.”
—South Bend Tribune

“If you enjoyed ‘The Sting’ you’ll also like Diggstown for the sparkle is the same even if the jewel is different.”
—Chattanooga Times

“Leonard Wise proudly displays ability to write a variety of intermingled plots and characters, keep them distinct and bring everything to a smashing conclusion.”
—Jackson Sun (Tennessee)

“Wise blends a thorough knowledge of the fight game with his knowledge of confidence games and comes through with a rollicking novel that shows once again that you never give a sucker an even break.”
—State Journal-Register (Springfield, IL)

“The suspense about the outcome of the hustle soon takes precedence and the characters become pawns for the game between two skilled and ruthless confidence men.  Leonard Wise has caught the mint-julep-and-magnolia essence of a small southern town...”
—Gambling Times

About the Author
Born and raised in Hudson, New York, Len spent three years in the 82nd Airborne Paratroopers. After service, he received his F.C.C. Engineering License and worked in radio for a few years before studying writing at Manhattan’s New School of Social Research. In addition to Diggstown, Len is the author of five other published novels, a number of them bestsellers: The Big Biazarro, Doc's Legacy, The Judean, Center Street, and Center Street--The Women. Since being in California, he has been a Story Analyst at several of the Major Studios and has taught writing at UCLA. He is also a noted artist with constant sales of his paintings.