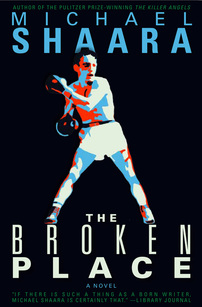 The Broken Place is the triumphant story of Tom McClain--Koren War hero, wounded veteran, professional boxer, college student, and sufferer from post-traumatic stress disorder.  Upon McClain's return to the U.S., he heads to his college campus in Vermont, to try to pick up the pieces of the life he'd left behind before he went into the army.  But while he's glad to reuinite with his old friend, fellow med-student, drinking companion and raconteur Charlie Ravenal, he's not sure he wants to stay in school.  He's restless, and not even a date with blonde, petite Lise Hoffman--the prettiest girl on the campus who is infatuated with him--can shake him out of his funk.  A trip to the Holy Land with his army buddy Tony Wilson ends in disaster in Afghanistan.  McClain comes to the realization that he's a fighter...it's all he knows how to do.  So he decides to do the only thing he's comfortable with, and climbs back into the ring.  It's there that McClain at last feels at home.  And his boxing career is on the rise--until the night he kills a man in the ring, a man he didn't know, a man he had no beef with.  McClain will fight no more, but it will take the love of a good woman and his best friend to save him...from himself.

Below are selections from the reviews upon publication in 1968, comparing Michael Shaara to Ernest Hemingway:
“…well-written first novel…  …a moving allegory of man’s search for belief in an unbelieving world…  If there is such a thing as a born writer, Michael Shaara is certainly that. Although owing a good deal to Hemingway (no doubt he is still young), he has a natural rhythm that is unmistakable…he has written an impressive first novel.”
--Library Journal

“Tom McClain is Camus’ Absurd Man—aware of the world and of the conflicts he endures in it, suffering from his existential outlook and seeking for the answer…  Mr. Shaara does a fine, convincing job of writing about war, about boxing, and in depicting Tom McClain’s feelings of frustration and emptiness, his desperate search for a meaning in life.”
--Publisher’s Weekly

“The author spars like Hemingway through much of this first novel about a soldier-prizefighter who kills a man in the ring. It’s probably inevitable. Writers are mostly violent people who act gentle. When a writer is a gentle person who acts violent, as Michael Shaara seems to be, Hemingway is one of the few guides available…  When Mr. Shaara writes at ringside he writes as well as anyone around…  McClain’s is a rare sickness, and more rarely still does someone write it truly. Mr. Shaara generates fits of murderous rage at least as well as Hubert Selby Jr., and somewhat better than Truman Capote…  The Broken Place doesn’t pull its final punches. Michael Shaara, one novel in, comes on at least as a middleweight.”
—Richard Rhodes, The New York Times Book Review

“Michael Shaara’s The Broken Place is a remarkable first novel, the kind that troubles the mind and sticks with you for a good time. It’s not an unusual theme: a man’s lonely search to find himself and his God; but it is handled in a particularly sensitive manner that makes the novel a moving experience. There’s something of every man in Tom McClain’s makeup, and perhaps that is why Shaara’s creation gains such deep character identification with the reader…  Many traces of Hemingway manner and style can be found in Shaara’s writing…  The allusions to Hemingway have meaning. The spare style of writing makes it possible to read the entire work in an evening. And that is the way it should be read and absorbed because it will have more impact that way…  It simply gathers momentum from the beginning and never lets up. That’s a tribute to the writer and to his theme…  There is a feeling that the Florida State University professor has put a great deal of himself into this novel. Perhaps that is why it strikes fire.”
--Tallahassee Democrat

“…an absorbing and convincing first novel…[a] rare ability to fuse [Shaara’s] experience with his very substantial abilities as a writer. Usually men of action can’t express themselves very well, but The Broken Place shows that when writing and doing go together something genuine and exciting can result…it is in the descriptions of McClain’s varied and often violent actions that Shaara is at his best.”
--Orlando Sentinel

“[Shaara’s] descriptions of prize-fighting from the inside—McClain’s actual thoughts, impulses, and feelings as he throws, and takes, his punches—are magnificent. And when he makes his peace at the book’s end, the reader is involved deeply enough with him to hope that this time it’s for real.”
--St. Petersburg Times

“Author Shaara has the sensitivity to present the interior voyage of a man becoming. Often McClain’s world fractures, but at those moments beauty and freshness enter like sunlight. McClain, the reader feels, will make it around the bend. This is a novel at once soft and strong, tender and tough, like the journey of a man, in search of his soul.”
--Miami Herald

“…Shaara’s impressive creative talent manifests itself in The Broken Place, a novel that is at once tough and tender, that moves rapidly and still remains reflective, that is sexually realistic without being pornographic, that is funny in spots, yet serious about the human condition…  Through all of this punishment McClain is searching for peace and belief in God. In taking him on this search, Shaara provides us with parallels with Hemingway, who furnishes the title for the novel in a passage from A Farewell to Arms. There is the Hemingway world of violence…there’s the Hemingway concreteness and feeling for nature…and one drunken party has the wild frenzy of those in The Sun Also Rises…  Yet one feels more compassion for McClain than one feels for most of Hemingway’s heroes…  In the best sense of the word, this is an intellectual novel, one that comments seriously upon man’s life: Shaara has a cure for the broken places that mar man’s soul…  I think Florida has a new novelist of great promise.”
--Tampa Tribune, Florida Accent Magazine

Michael Shaara was teaching creative writing at Florida Statue University while writing The Broken Place.  He'd already published most of his 44 short stories (mostly science fiction).  Under contract to deliver the book, the stress of the writing and teaching a full course load caused him to have a serious, nearly fatal heart attack.  He was even pronounced dead while the ER doctors attempted to revive him.  This near-death experience no doubt colored his writing of The Broken Place, as did his army experience (a paratrooper with the 82nd Airborne during peace time), his amateur boxing career, and his marriage to his college sweetheart, Helen Elizabeth Krumwiede, the model for Lise Hoffman.  Shaara won the Pulitzer Prize in 1975 for The Killer Angels, his second novel, a brilliant portrayal of the Battle of Gettysburg that was later made into a movie ("Gettysburg") starring Jeff Daniels, Martin Sheen, Tom Berenger, and Sam Elliot among others.  A second heart attack killed Shaara in 1988 at the age of 59.  His son, Jeff Shaara, has taken up the mantel of writing historical fiction, writing bestselling novels of the Civil War, Mexican War, WWI and WWII, receiving the commercial success Michael Shaara was never able to achieve.