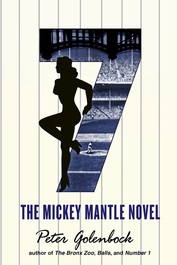 In Peter Golenbock's shocking and revealing first novel, Mickey Mantle tells the hidden story of his life as a baseball hero and asks for forgiveness from his friends and family. If the revelations in Jim Bouton's Ball Four were the first crack in the Mangle legend, then 7 smashes the myth to reveal the human being within. Bestselling sportswriter Peter Golenbock knew Mickey Mantle, Billy Martin, Jim Bouton, Joe Pepitone, and many of Mantle's friends, family, and teammates. While Mickey was a good person at heart, he had a dark side that went far beyond his well-known alcoholism and infidelities. In this fictional portrait, Mickey - now in heaven - realizes that he's carrying a huge weight on his shoulders, as he did throughout his life. He needs to unburden himself of all the horrible things he did and understand for himself why he did them. He wants to make amends to the people he hurt, especially those dear to him; to the fans he ignored and alienated; and to the public who made him into a hero. Mickey never felt he deserved the adulation, could never live up to it, and tried his damnedest to prove it to everyone. The fact that he was human made the public love him that much more.This Mickey Mantle is revealed as a man who lived in fear - fear of failure, of success, of life beyond baseball, and of commitment. His was a life filled with sex, yet devoid of deeper satisfactions. From the alcohol-fueled good times and bad to the emptiness when the party was finally over, 7 has it all. Through the recounting of his exploits on and off the field, some of them side-splittingly hilarious, some disturbing, and others that will make your head shake in sympathy, Mickey comes clean in this novel in the way he never could in real life. 7: The Mickey Mantle Novel puts you inside the locker room and bedroom with an American icon every bit as flawed and human as we are.

About the Author
Peter Golenbock is one of the nation's best-known sports authors, and he has written some of the bestselling sports books of the last thirty years, including Idiot (with Johnny Damon), Balls (with Graig Nettles), The Bronx Zoo (with Sparky Lyle), Bums: An Oral History of the Brooklyn Dodgers, and Wild, High and Tight: The Life and Death of Billy Martin. Five of his books have been New York Times best sellers. Golenbock lives in St. Petersburg, Florida. This is his first novel.