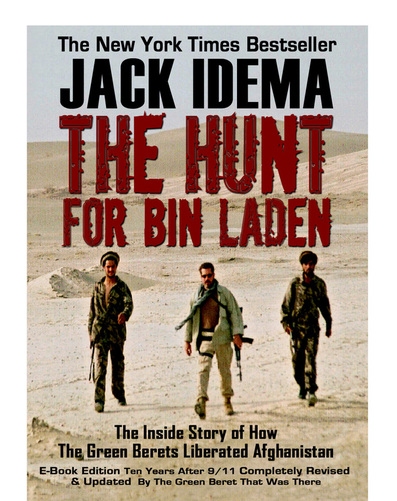 As the (al-Qaida terrorists) charged one wall, three Green Berets charged over the parapets, oblivious to the enemy small-arms fire that was cracking by their heads and shoulders.

'Focus, squeeze, focus, squeeze,' they recited quietly... Each time... the lifeless body (of an al-Qaida terrorist) would snap back through the desert air and drop onto the sandy courtyard.

The war in Afghanistan was the most secret conflict since the CIA's covert war in Laos; thousands of journalists covered it, yet, ironically, little is known about how it was waged or what really happened - until now.

The Hunt for Bin Laden: Task Force Dagger plunges the reader into the West's War on Terror, from the first top-secret meetings in Tampa, Florida, on the afternoon of September 11, 2001 through to the liberation of Kabul sixty two days later and the tragedies of Operation Anaconda. The book takes the reader into the heat of battle - as seen through the eyes of the Green Berets and the SAS on the ground. This is the story of how only a few hundred men, operating from a secret Special Force's base, changed the course of history in Central Asia and destroyed a one-hundred-thousand-man terrorist army in less than ninety days.

Action-packed and controversial, The Hunt for bin Laden: Task Force Dagger is teeming with revelations and inside information: the truth about John Walker Lindh and Mike Spann; the failure of the 'conventional' generals; the courage of the Northern Alliance; the wounding and murder of journalists; and the flaws and frustrations of the hunt for bin Laden himself.

The Green Berets were calling in airstrikes and fighting alongside the armies of the Northern Alliance against the terrorist al-Qaida and Taliban. In less than three winter months about a hundred Green Berets and forty SAS men accounted for the deaths of perhaps as many as forty thousand terrorists and the winning of a war in Afghanistan - where the Soviets had found fighting a war all but impossible.
About the Author
Jack Idema was born on Memorial Day, 1956-the federal holiday commemorating U.S. soldiers who died in military service. He is co-author of the best-selling books The Hunt for Bin Laden (Random House) and Task Force Dagger (Macmillan UK) about the first two hundred American Special Forces who defeated the Taliban and al-Qaida terrorists in Afghanistan between October 2001 and June 2002, on which The Hunt for bin Laden: Task Force Dagger is based. He is the recipient of the 2001 National Press Club Award, one of the world's most prestigious awards for Journalism, for "The Colonel's Wife" chronicling his one year search for the killer of a Green Beret colonel's wife.

His investigation of Soviet Union nuclear smuggling during the Lithuanian Revolution, in which he participated as a combatant, enabled both "60 Minutes" and US News & World Report to win the IRE (Investigative Reporters and Editors) Tom Renner Award for Outstanding Crime Reporting in 1996 for their stories on Russian nuclear smuggling.

Idema spent his military career in the United States Army Special Forces & Special Mission Units, more than twenty years working with or for the CounterTerroristGroup US, and over seven years in Afghanistan. He has trained, worked with, or conducted operations with almost every Special Operations Force in the world, including the British SAS, the German GSG-9, the French GIGN, the Soviet GRU military intelligence, and Soviet Alfa Group Commandos.

While there are disputes over who was the youngest Green Beret in American history, the fact remains that Jack Idema was awarded his Green Beret in 1975 by Colonel Charles Beckwith, founder of Delta Force. No other person has ever even been admitted to the Special Forces selection course at the age of eighteen, no less graduated and been awarded the coveted Green Beret at nineteen.