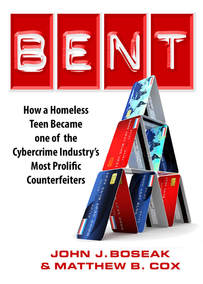 INKED FROM HEAD TO TOE, with an addiction to strippers and Cadillacs, John Boseak is not your typical computer geek. He was, however, one of the most cunning scammers, counterfeiters, identity thieves and escape artists alive—and a major problem for the U.S. Secret Service’s war on cybercrime. With a savant-like ability to circumvent banking security and stay one step ahead of law enforcement, Boseak made millions of dollars in the international cyber underworld. Then, leaving nothing but a John Doe warrant and an empty bank account in his wake, he vanished, only to resurface as an upstanding husband and father, and hardworking middle-class citizen.

JOHN J. BOSEAK holds a degree in Graphic Design from the Art Institute in Miami, Florida, giving him a unique expertise in illustration, digital manipulation, commercial printing and, as it turns out, forgery. He lives in Northern California.

MATTHEW B. COX is the author of Once a Gunrunner… and the co-author of Generation Oxy: From High School Wrestlers to Oxy Kingpins with Douglas Dodd, which is being published by Skyhorse. He is a graduate of the University of South Florida, he lives in Central Florida.